After hearing a recent PSA for crop over on the radio where women were warned to conserve their drinking for the crop over festivities, I was livid.

It perpetuates rape culture by blaming the victim as opposed to the perpetrator. Instead of preventing rape by explaining/educating about consent, it places all of the responsibility on the female in the situation therefore stating that if she is raped that it is her fault because she was intoxicated. Which is absolutely incorrect. That only justifies the action of the rapist and the act itself. It removes the responsibility and blame that falls solely on the rapist by labeling him or her incapable of rational thought when seeing a female unconscious.

It completely dismisses the fact that men can be raped. Which is extremely harmful and completely inaccurate. Men too can be victims of rape by this scenario. Its already bad enough that men do not want to report that they have been abused physical but complete dismissal of this would discourage them from being able to report instances in which they have been taken advantage of sexually.

Rape is the rapist’s fault. Period. Rape can occur no matter what you’re wearing, doing, going, gender or whom you are with. The only way to prevent this is to educate everyone about consent.

Instances in which someone cannot consent to sex: 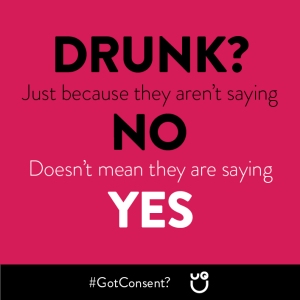 If someone consented to sex and then became intoxicated, DO NOT have sex with them. They are no longer in a position to consent. Make sure they’re safe or that they arrive home safely.

If someone is underage and they engage you, DO NOT have sex with them. They cannot consent period. Engaging them in any sexual acts is statutory rape.

If someone consented to sex and then fell unconscious or asleep, DO NOT have sex with them. They are not in a position to consent. Make sure they are safe or have arrived home safely.

If someone consented to sex once before, it doesn’t mean they automatically consent again in future. If they decline the offer then they have not given their consent. DO NOT force yourself onto them.

If someone declines to dance with you, back away and dance with someone else who has agreed to allow you a dance or dance by yourself. Under no circumstances do you continue to badger that person or force yourself onto them. That is a direct violation of their personal space and a complete disregard of their desires.

Buying someone a drink does not automatically give you consent to their body. You are not entitled to their body simply because you purchase their beverage. Consent is not a vending machine item, you don’t put money in and consent falls out.

Going to someone else’s house after partying does not automatically give you consent to their body.

If they say no, then the answer is no.

No is a complete sentence all on its own. It does not require an explanation.

Let’s make this a safe and enjoyable Crop Over for all. 🙂

One Reply to “PSA for Crop Over.”